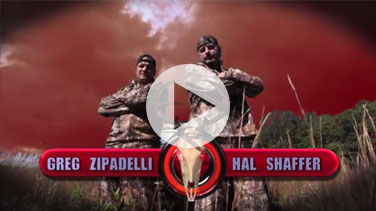 Drop Zone TV, a highly acclaimed reality hunting show, is the celebrated collaboration between veteran outdoor industry personality Hal Shaffer and two-time NASCAR Sprint Cup Champion Greg "Zippy” Zipadelli. The duo met on a Kentucky whitetail hunt seven years ago, and immediately became good friends. Since then, Shaffer and Zipadelli have shared many memorable hunts, and now bring their unforgettable adventures to their many fans each week. Drop Zone’s focus is equal parts big game hunting action and entertainment, as Shaffer and Zipadelli aim to deliver a half-hour of fun, excitement and education to hunters of all skill levels. From Alaska to Argentina and Canada to Mexico, the Drop Zone crew treats viewers to a mixed bag of big game hunting action each week. This hit show features dramatic hunting footage, high-end production value and the real life adventures of a team of dedicated, passionate outdoorsmen. In addition, viewers gain interesting insights into the mind and life of one of NASCAR’s most successful and celebrated crew chiefs.

Blazing the trail as only Shaffer and Zipadelli can, Drop Zone introduces an exciting new concept in outdoor programming, as Shaffer and Zipadelli host hugely popular gatherings called "DZ Block Parties” in select towns. As they travel the country in search of big game, big laughs and big adventure, Team Drop Zone makes an effort to enjoy as much quality time with their loyal fans as possible - and give away ample amounts of valuable prizes from their impressive list of sponsors. This fun-filled format has been a big hit with their fans, and has helped make Drop Zone a household name.

Hal Shaffer, an Alabama native and lifelong outdoorsman, has lived a life of adventure from an early age. He took his first buck at age 13, and has been hopelessly hooked on the outdoors ever since. With NASCAR pit crew experience under his belt, Shaffer shares his co-host’s love of NASCAR and all-things-racing. A veteran of both outdoor television and radio, Shaffer is a seasoned professional who knows how to entertain and educate fans and consistently delivers high-quality programming week in and week out. Shaffer began his entertainment career doing radio ads for a Chevy dealer and parlayed that into Carolina Outdoors as his first stint in hunting TV. In his first episode, he hosted football legend, Dan Marino as a guest. His personality is infectious and is only overshadowed by his love of the outdoors. Shaffer pursues whitetail, elk, mule deer waterfowl, turkey and other game with equal passion. While he chases this wide variety of game, Shaffer is a diehard bear hunter and holds the pending world record black bear. An adept marksman and skilled gunsmith, Shaffer knows his way around a rifle and has perfected what he calls the "Thompson/Center TKO” - the taking of a trophy-class animal with a clean, one-shot kill.

Best known for his many impressive accomplishments in the world of NASCAR, Greg "Zippy” Zipadelli has notched two NASCAR Sprint Cup Championships (2002 and 2005) and 33 total wins in the upper echelon of NASCAR racing. A seasoned pro who has considerable experience managing some of NASCAR’s top teams and drivers, Zipadelli is the Competition Director for Stewart-Haas Racing, where he manages the racing operations of the #14 Chevrolet driven by Tony Stewart, the #39 Chevrolet driven by Ryan Newman and the #10 Chevrolet driven by Danica Patrick. He is also Crew Chief of the #10 GoDaddy.com Chevrolet driven by Danica Patrick. While he plans to continue his racing career, Zipadelli has decided to shift his focus and pursue another interest ... his love of the great outdoors. His passion for the outdoors is renowned, and he’s as comfortable in the whitetail or turkey woods as he is on the NASCAR track. A dedicated father of three and a decorated outdoorsman who’s logged countless miles pursuing his passion, Zipadelli is excited to use Drop Zone as a platform to share his love of hunting, and as a means to educate and entertain viewers and teach kids about the outdoors. Zipadelli brings a passion and desire to excel that has earned him the respect of his peers and fans - both in the woods and on the track.

For over 15 years, Outdoor Channel has been a pioneer in the industry and it continues to be the innovating leader for quality outdoor entertainment. The combination of thrilling content, original programming, HD simulcasting and a first in class broadband offering means that Outdoor Channel dominates an editorial category that boasts nearly 90 milion enthusiasts who spend around $120 billion a year on outdoor activities.